THE PRAYER THAT WAS GRANTED 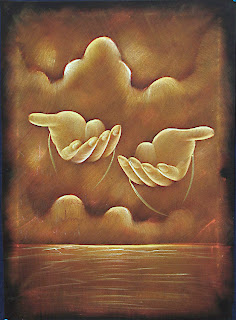 He was lame in one foot and like other multi-theists, he worshipped idols. He had also once been the custodian of one of the idol temples of the city of .

he young children of his city stole his idol many times and threw it among the rubbish so that he would stop worshipping idols. However he continued to worship the idols. He would take a great deal of trouble finding it and then he would take it home, clean and scent it and start worshipping the idol again.

He used to say to the idol: "If I only knew who takes you, I would make him pay for it. But believe me, I do not know who he is!"

He continued in this way worshipping idols until one day he was faced with a strange scene - he saw that someone had tied his idol to the corpse of an animal and had thrown it in the middle of a pit!

Upon seeing this, he was taken aback. In fact, he could not believe such an insult had been made to his idol. He decided to take the idol to his home again and apologize when suddenly an idea occurred to him. He asked himself, "Really, what sort of a god is this idol? Why is it so helpless and miserable? Why is it unable to defend itself? How can such a weak thing be my protector?" ..and thus he came to realize the truth and to hate such a weak god who was unable to do anything. He then reproached himself for having been an idolater. It was then that the spark of faith lit up his heart so that while shedding tears of remorse, he started repenting. In this way he came to believe in the unique God and he became one of the most devoted Muslim.

A few years later, when the multi-theists attempted to fight and destroy Islam, he hurried to help God's religion and thereby left a splendid reminiscence.

The city of was over-excited. People were getting themselves ready for a great war with the infidels and multi-theists of the Quraish in order to give them the punishment they deserved and to prevent their further oppression.

Each of the Muslim hurriedly tried to be the first to announce his readiness to help the Holy Prophet of Islam in fighting against the enemies of Islam.

Amr bin Jamuh, the lame man whom we have already mentioned was, like other Muslims, desirous of defending Islam alongside the Holy Leader of Islam. But each time he remembered that he was lame in one leg, he became rather annoyed and worried lest the Holy Prophet should not allow him to go to war.

Amr had three sons who were all ready to go to the battlefield. However, he himself was sad and said, "Today I must stay at home and not go to the jihad (religious and spiritual struggle in the way of God) on account of my lame leg! It will be a dishonor if I die in bed while I know my jihad is necessary and useful for the cause of Islam. Why should I not fight for the cause of God and achieve the sublime honor of martyrdom?"

As Amr was thus talking to himself, a thought occurred to him, which made his heart tremble with joy and his eyes flash with eagerness. He seemed to have found the solution to his problem. Limping, he ran towards his house and called his wife, Hind, in a loud voice.

Hind went to her husband rather amazed and asked, "Amr what is the matter?"

"Hurry up. Hurry up. Bring me whatever is left over from my son's war equipment. I want to take part in this battle. Hurry up..."

"What are you saying, Amr. God has exempted people like you from fighting..."

"Stop saying that. Do you want your husband to stay at home while your sons acquire the glorious blessing of martyrdom? I swear by God that I, too, am longing for martyrdom and wish to defend Islam as my sons do. Of course, I love you, but I cannot prefer my love for you to my love for meeting my God. Moreover, though God has exempted me from fighting, He has not prohibited me from doing so. Now please prepare my things quickly."

Seeing that her husband was so determined to take part in the battle and would by no means change his mind, Hind did not say anything more and hurriedly got his things together. However, as she was worried about her husband, she quickly went to the chief of the tribe and her family to see if they might be able to convince him from going to the battlefront. She then returned to her home with them.

Amr was quite ready. He had put on his chain, put his helmet on his head, drawn his sword out of its sheath and was looking at them.

When Amr observed that his wife had gathered the chief of the tribe to prevent his going to war, he turned to him with a determined face and said, "Do not insist. It is useless. I will not change my decision!"

But the chief of the tribe went on insisting that he should not go to the battlefront. Their reasoning was that it was impossible for a lame man to fight.

The old man was not able to make them understand that his love for God and for martyrdom could not easily be driven out of the heart of a Muslim. Finally, he had no choice but to go to the Holy Prophet with his family and with the chief of the tribe and to obey whatever command he would give him.

When they were in the presence of the Prophet, Amr said, "Oh Prophet of God, my relatives want to prevent me from going to the jihad. They want to imprison me at home while I am so eagerly desirous of jihad and fighting for God's sake with this very lame leg."

The Holy Prophet answered, "Oh Amr! God has exempted you from jihad. Fighting is not a duty of yours."

"I know oh Messenger of God, but I ask that you allow me to fight against the enemies of Islam alongside you. I beg of you not to disappoint me..."

When the great Prophet saw that the fire of faith was so enflaming in Amr's pure heart, he gave him an affectionate look and then addressing his relatives and the chief of his tribe, said, "Do not disturb him. Let him go to the battlefield. Martyrdom is his heart's desire. Perhaps God will grant him this blessing." And thus Amr went to the warfront.

As the battle broke out, all saw Amr attacking the core of the enemy's army like a powerful, angry lion and shouting, "Where are you, enemies of God? I challenge you all because I desire to meet my God."

His sons, too, were busy fighting and creating memorable legends on the battlefield. God witnessed the combat of the brave fighters who were defending their divine faith. Amr and one of his sons fought and fought and were so severely wounded that they finally fell to the ground while their bodies were covered with blood. Thus they sacrificed their lives for their truthful faith. Like a faded tulip, Amr was resting in the middle of the battlefield.

And after a while, the battle ended. The women of hurried to the battlefield to see what had happened to their combatant men.

Some had spread the rumor that the Prophet had been martyred. They were all anxious to know whether that heart-rending news was true.

Ayesha, the Holy Prophet's wife, was among these women. As she, was going towards the battlefield, she saw that Hind, Amr's wife, had put the corpses of her martyred husband and son on a camel and was holding its halter in her hands, but the camel refused to move on!

Ayesha asked her, "What news can you give me?"

Hind answered, "Many thanks to the Gracious God for the Holy Prophet is safe and sound. I feel no sorrow as long as God's Prophet is healthy and safe."

Ayesha asked her, "Whose corpses are these?"

These are the corpses of my husband, my son and my brother and I want to bury them in . But I wonder why the camel does not go ahead and seems to be inclined to return to the battlefield."

No matter how hard Hind tried to make the camel go to , she failed and instead she observed that the camel started going towards Uhud in which place the battle had taken place.

Hind had no choice but to follow the camel and when she reached Uhud she went straight to the Holy Prophet and told him the whole matter.

The Holy Prophet of Islam asked, "Did Amr not say anything when he was leaving for the battlefield?"

"Yes, he did, oh Prophet of God. He begged God not to return him to ."

"Then his prayers have been heard by Almighty God. Now we will bury the three of them in Uhud."

After the three bloody bodies had been buried, the Holy Prophet said to Hind, "In the next world, too, they will be together. How blessed they are!"

While shedding tears of love for God and for the believers, Hind asked the Holy Prophet, "Oh Prophet of God, please pray for me so I too might join them and share in their blessings." And the Holy Prophet prayed for all of them.

Posted by Rehana Chaand at 11:39 AM No comments: